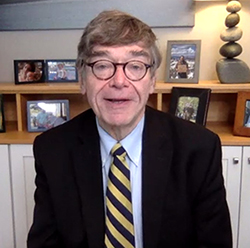 Charlie Cook of Cook Political Report predicted the 2020 election will have the largest turnout in history during the IBA’s Leaders Speaker Series today. He said 45 million Americans have already voted. That’s a third of the total voters in 2016. A trusted and accurate voice on all things political for more than two decades, Cook used poll numbers, economic indicators and historical data in a discussion of today’s political and legislative environments.

Regarding the presidential election, Cook offered a thorough examination of the 2016 election results and what polls got wrong at that time and how they’ve tried to be more accurate in the 2020 election. He said the polls weren’t that far off in 2016, however, as they predicted Hilary Clinton would win the popular vote by 3.2 points. Her victory in the popular vote ended up being 2 points, while President Donald Trump won the electoral college. Cook did say that pollsters undervalued rural voters in 2016 and under-sampled white voters without a college degree, who typically voted for Trump. Polls show former vice president Joe Biden with a lead over Trump, heading into their second and final debate.

Cook predicted an extremely close fight for control of the U.S. Senate. Central to that fight — and likely maintenance of split party control of the levers in Washington, D.C. — is Iowa’s Senate race. Sen. Joni Ernst has received support from a number of banking groups, including the IBA, the American Bankers Association and the Friends of Traditional Banking. Log in to the IBA website, and click on “Voter Education” under the “Government Relations” tab at the top of the screen to view congressional profiles to see which other candidates the IBA has supported.

Registration is still open for the Leaders Speaker Series. Along with access to the remaining sessions, registration comes with recordings of each session, including the first four sessions with Cook, Federal Deposit Insurance Corp. Chairman Jelena McWilliams, Acting Comptroller of the Currency Brian Brooks and global strategist and author Peter Zeihan.

Register for the Leaders Speaker Series