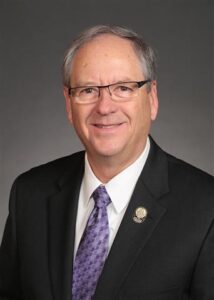 Rep. John Landon of Ankeny passed away after a brief, but hard, battle with cancer. Rep. Landon was in his fifth term in the statehouse and had just finished his ninth legislative session. He served on the Commerce Committee most of his career and also served as the chair of the Administration and Regulation budget subcommittee, which has jurisdiction over the Iowa Division of Banking. Landon was a friend of Iowa Banking and will be greatly missed.

Iowa law requires a special election to be called within five days following a vacancy in the Iowa Legislature. Gov. Kim Reynolds has set the date for Sept. 14. District 37 includes Ankeny, Alleman and part of rural Polk County. The outcome of the election will not change the overall balance of power in the Iowa House where Republicans hold a 59-41 majority.

Democratic candidate Andrea Phillips, who lost to Landon in the last election, has indicated she plans to run again to fill Landon’s unexpired term. A Republican candidate has not yet been announced.