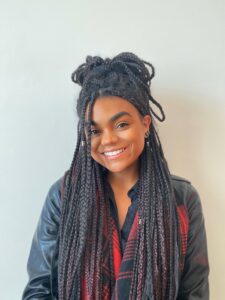 Aliyah Bastion’s banking career began at age 18. A temp agency connected her with a bank, where she started out as a teller. Through hard work that was partly instilled in her through detasseling corn in the summers, she soon found herself with a full-time position. She has also been promoted twice since assuming a full-time role.

Today, Bastion is a teller supervisor at Community State Bank in Des Moines. “Bastian has been incredibly successful as a young professional in a critical role to the bank and continues to excel,” said Kate Hightshoe, the bank’s diversity officer. “She has demonstrated inclusive leadership in her role and continues to uplift her team to do and be their best.”

How did you get into banking as a career?

I was 18, working part-time and was on the hunt for a full-time job. I decided to go through a temp agency that a friend of mine had previously gone through and suggested to me. I started working for Community State Bank in Des Moines as a temporary teller and was hired on full time a few months later. A couple months after being hired on full time, I was promoted to assistant teller supervisor and then promoted to teller supervisor a few months after that.

Prior to your current role, what was the most unusual or interesting job you’ve ever had, and what lesson did it teach you that you still use today?

While I was in high school. I detasseled corn fields in the summers. I would wake up around 4 a.m. to catch the bus at 5 a.m. and be out in the fields by 6 a.m. While those few weeks each summer were some of the hardest and hottest, it really taught me the importance of hard work, a good name and being a reliable worker.

What is your best elevator pitch for why banking is a great career?

In my experience with banking so far, I have found that it is a great industry for career growth and building relationships within your community!

How does getting involved with the Iowa Bankers Association help you and your bank?

The IBA is a great way to network with other banks in your community and is a great educational resource as well!

When you’re not at work, what do you like to do most?

Spending time with friends or going back home to see my family.

What is a quote or guiding principle you live by?