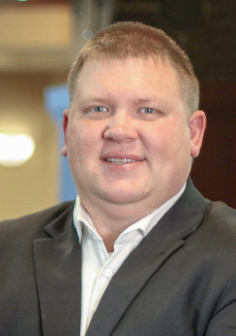 Luke Brady grew up around banking and was first introduced to banking when he became a teller while in high school. After graduating from the University of Northern Iowa with a degree in finance in 2007, he returned to his family bank and worked through several different roles, including teller, credit analyst, loan officer, vice president and regional vice president.

As of Sept. 1, Brady, who also completed the Iowa School of Banking in 2009 and the Graduate School of Banking at Colorado, was named president of Community Savings Bank in Edgewood, succeeding his father, Steve Brady — once again following the family tradition.

How did you get into banking as a career?

I grew up in a banking family. I started working as a teller while in high school. I decided to use my early knowledge in banking to get a head start on a career in banking. After college I returned to the family bank and worked through several titles including teller, credit analyst, loan officer, vice president, regional vice president and now president.

Prior to your current role, what was the most unusual or interesting job you’ve ever had, and what lesson did it teach you that you still use today?

For a couple weeks in high school, I worked at a local farm doing odd chores through their construction of a large dairy barn. Jumping into a skid loader and moving piles of dirt, rock, and broken concrete all day gives a great contrasting perspective of what other jobs outside of banking encounter every day. I learned that the farmer starts early in the morning and takes many roles throughout the day such as mathematician, feeder, milker, engineer, driver, construction worker, chemist, accountant, marketer, and business manager. They do it all because if they do not then it will not get done!

What is your best elevator pitch for why banking is a great career?

I have a passion for helping out the local schools and non-profit organizations. Being a banker it is important to make sure those organizations thrive so that everyone in the customer base are benefiting.

How does getting involved with the Iowa Bankers Association help you and your bank?

Iowa Bankers Association is a great resource for anything we need at our community bank as simple a reference of a vendor to partnering with the association for marketing, human resources, compliance, education, and being our voice with the Legislature.

When you’re not at work, what do you like to do most?

When I’m not at work I’m usually doing something with wife and my children. There are lots of football, baseball, basketball games and community events that my whole family attends on a regular basis. On Friday nights in the fall, you will find me running the scoreboard at the football game. In late June, you can find me running the Edgewood Rodeo with my great team on the Edgewood Chamber board. In January I can be seen running wrestling tournament software at a couple local youth tournaments.

What is a quote or guiding principle you live by?