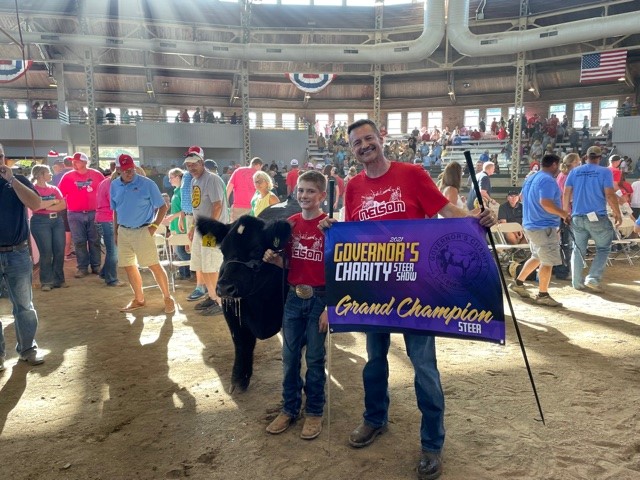 This year’s IBA-sponsored steer, “Nelson,” is from Audubon and is owned by Lane Elmquist, son of Joe and Brittany Elmquist. Jeff Angelo, host of “Need to Know With Jeff Angelo” on WHO Radio, was the IBA’s celebrity showman for the event. It was the first time Angelo had participated in the event. Previously, Nelson was the Grand Champion of the Audubon County fair and was named the Reserve Grand Champion of the Southwest Iowa Shootout, which is comprised of the 24 County Fair Champions throughout Southwest Iowa. Don Foley, who retired from Iowa Bankers Mortgage Corporation in 2016, negotiated the IBA’s sponsorship.

After the steer show, Nelson was auctioned off for $15,800, which will be used to support Iowa’s Ronald McDonald House chapters. More than $375,000 was raised at this year’s event. Since its inception in 1983, the Governor’s Charity Steer Show has generated more than $4.5 million in support of Iowa’s Ronald McDonald House chapters. The funds help provide a home away from home for families of children who are being treated in nearby hospitals.